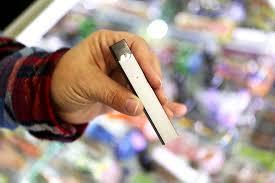 It’s easy to get addicted to vaping, not so easy to quit

A Maine teenager thought she would merely find out what all the hype was about.

Everyone faces battles in their life, often ones we didn’t choose.

I started vaping the summer before senior year. My sophomore friends were using JUUL brand vapor devices after swim practice and they wanted me to try it.

I knew everyone was doing it at my school and there was always a part of me that deeply wanted to – that wanted to discover what the hype was about this device that looked like a lash drive. The fact that there were flavors like mango, fruit medley, and mint made it seem even less dangerous.

Eventually, I took a couple puffs of the JUUL. Well here I am now, writing this column to share my story.

I soon got my own JUUL and began purchasing pods through upperclassmen. At first it was a social thing.

School was boring and vaping became our escape during the school day or even at school games. For the longest time I thought I wasn’t addicted until I realized I couldn’t go a single day without hitting the JUUL. Then it was hours, and eventually minutes.

I wouldn’t let myself use it before swim practice, but eventually it wasn’t up to me. It was my addiction taking over. I also lost an extreme amount of weight senior year because I didn’t realize how much of an appetite suppressant nicotine is.

Senior year I was going through a pack a week.

Basically, a 17-year-old was going through a pack of cigarettes a week. A pack of pods started at $16 and was eventually raised up to $26.

I eventually started losing respect for myself and stopped doing the things I loved, mainly because it was extremely challenging.

The hardest thing for me with this addiction was having to hide it from my family. There were several instances my parents had found either pods or even the JUUL itself and I would come up with excuses as to why I had it.

Whether I said it was my friends’ or I was only experimenting, I think it was easy for them to believe in the beginning because they never expected me to be kid to fall into addiction and neither did I. I was letting down my family, but I was most of all letting down myself.

While I was returning back to Marist College for the second semester, I got really sick with strep throat. I had absolutely no appetite and I was remarkably uncomfortable all of the time.

During this time I really began to reflect and appreciate my health and how it isn’t something I should be taking for granted. As someone who previously had heart surgery, vaping is one of the worst things I could be doing to my body.

Like my mom has told me over and over, “You are given one set of lungs, use them wisely.”

There are healthier things we can all be doing to have fun whether we are alone or socializing. In the end you are really the only one who can change you. I had quit and I was the only one who could make this decision for myself.

Withdrawal is hard and saying “no” is hard. I have only felt more alive and stronger everyday since I quit. I have a better appetite and I workout every single day. I will do nothing but support my friends to make the decision I have to quit.

We should all help each other overcome something.

The one message I want to share with others is this. Never be driven by peer pressure. Be your own person. Be the best person that you could ever be. In the end that’s what matters.

To those of you who are struggling with addiction, it does get better. The more people who share their stories and choose to make a change to their lives, the more others will want to do the same.

Jillian Juris of Cumberland is a student at Marist College in Poughkeepsie, New York.

For the longest time I thought I wasn’t addicted until I realized I couldn’t go a single day without hitting the JUUL.